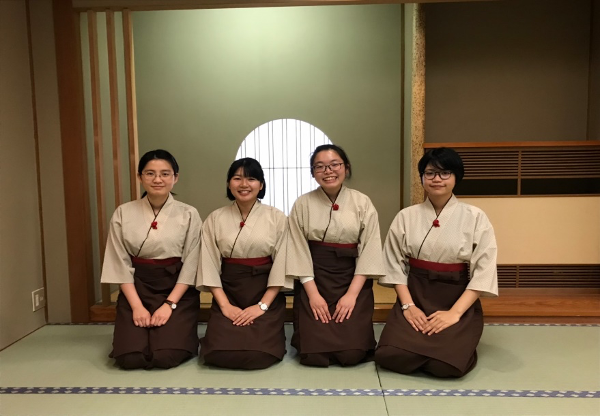 Within a year I took 35 credits consisting of 16 courses with 2 credits and 3 courses with 1 credit. Some of the courses I took at Kobe Women University were Nihongo Bungaku Nyuumon II, Shakai Gengogaku, Nihongo Nihon Bungaku Enshuu II, and Gengogaku Gairon. All courses are in Japanese and allow students to bring a dictionary and other translation aids, but may not use translation aids during exams. The semester period in Japan is different from that in Indonesia. April to July is the odd semester period and September to March is the even semester period starting.

The semester period that I participated in started from the even semester, so the material in the courses given was a continuation of the odd semester. Even semester lessons are more difficult than odd semesters, so I need a long time to adapt to the assignments given.

The number of tasks did not stop me from participating in club activities on campus. I joined the archery club or kyuudo-bu which at that time had four members. I was interested in trying out kyuudo-bu because the senpai of the club accepted new members, even without the need for archery experience. Club activities are held from 18.00 to 19.00 so as not to interfere with class time on campus. Besides kyuudo-bu, me and other foreign students joined the Asian friends association club or Asia tomo no kai. In contrast to kyuudo-bu, Asia tomo no kai does not have a definite gathering time because the activities carried out are gathering and sharing experiences with teammates. Asian club tomo no kai meets off campus to travel or party together. The club activities were more tiring than I expected, but it was fun and I was able to make friends with Japanese students and other foreign students.

In January, I and 3 other foreign students did an internship at a well-known hotel in Awajishima. Internship is done for 2 days without getting paid. However, we were given a hotel room to stay and were given free access to the onsen after the internship was over. This experience gave us the opportunity to work as Japanese hotel staff. After the internship, we traveled for a while in Awajishima before returning to Tenjinryou dormitory. The unfortunate thing is that my foreign student friends have to go home first in February because of the difference in our program period. So I continued to carry out campus and club activities while waiting for other foreign student friends to come.

The spread of the Covid-19 virus in Japan since March has stopped all campus and club activities. On-campus learning activities have also shifted to online. So student exchange activities from other countries were also postponed. At that time, my sensei had given the option to return to Bali because Japan declared an emergency status and carried out a lockdown. After the situation improved, I was asked to return to continue the student exchange program in Japan until it was finished. The student exchange program will be finished for another semester, so I feel I can carry out this program to completion in Japan. I and the female students who live in the dormitory strictly follow the protocol so that the cases of Covid-19 patients do not increase. Then on spring break, I was asked to move into the lecturer's apartment because the Tenjinryou dormitory had to be temporarily closed until the Japanese government declared an emergency status.

I spent learning activities in the odd semester in the lecturer's dormitory. Even so, I was allowed to walk around Hyougo as long as I followed the health protocol. I took a walk to the park, beach and temple located in Suma. In addition to buying souvenirs at Sannomiya. Then I met my friends from Indonesia who also survived the Covid-19 pandemic in Kobe.

I was sad and disappointed because of the Covid-19 virus that spread in the world, making my Japanese friends and foreign friends have to cancel the student exchange program activities between countries. Even so, I am very grateful to have had many experiences of living in Japan. I hope that this pandemic will subside soon and I will get the opportunity to study again at a University in Japan.