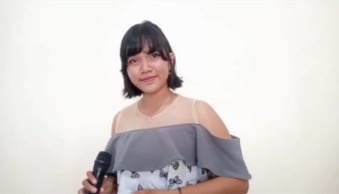 In 2021 in March I took part in the Cover Sing competition at the Bunka no Hi event organized by the Japanese Culture Unit, Bandung Institute of Technology. Actually, this is the second time I have participated in a national level Cover Sing competition. Previously, I had participated in a Cover Sing event at the Himawari UAI event but it didn't work out. At first, I didn't really want to take part in the race at Bunka no Hi because I still felt sad because I had lost in the previous competitions. But I thought, at least I should feel again what it's like to compete nationally, it's good to fill my spare time too and the registration fee is also quite cheap, so I decided to take part in the competition.

Usually the songs that I often sing during Cover Sing are low or stable, such as songs by singer Aimyon or songs by male singers. However, this time I thought to take a little risk by bringing a song that has a slightly higher tone from the singer TRUE, at that time TRUE was also booming because of the movie showing "Violet Evergarden". At first, every practice I always lacked confidence because I felt the tone I took was always wrong and ended up false. But thanks to the support from my friends and my parents who always listen when I practice and help correct my shortcomings, I finally have a little more confidence in singing TRUE's song Sincerely.

On the day of the video shoot, I did everything myself, from the makeup, to managing the audio, and also to the video shoot. I took advantage of the minimal equipment by arranging the boxes as a tripod. I spent approximately 3 hours, from the beginning of the recording to the end, because I had to tidy up the recording room, namely the kitchen. Because my house is close to the road and only the kitchen room is soundproof, so inevitably I have to record there so as not to disturb the other residents as well.

On the day of video collection, usually each participant is also required to upload it to Instagram. I was actually very nervous when I uploaded it because after I listened to it again, I think there are still many missing or inappropriate notes, there are also voices that echo. I've also watched videos from other participants, and their video editing is very good, some even made it like a video clip, that's also what made me very nervous. But after I uploaded, the response was very unexpected, I got a response from my friends and seniors, their response was very positive, it made me a little calmer. So I thought, regardless of the result, I will still sing to share my love for a song and to entertain everyone.

After that, I didn't think that on the day of the announcement of the winner, I got the 2nd Place of Hope, and even that I was notified by my friend through the group, because I didn't check the announcement that day. I was very happy and also touched at that time, because this was my first time winning a Cover Sing competition, especially at the national level, even though I only finished in 2nd place in Harapan but I felt very happy. I am very grateful, thanks to the help and support from friends and parents, I decided to keep singing and keep practicing because I feel I still have many shortcomings and there is still a long way to go to become the main champion. I hope that what I have achieved today can inspire my friends to be passionate about achieving their dreams, because every success that is achieved there must be hard work, always getting up even if you fail and also support from those closest to you.